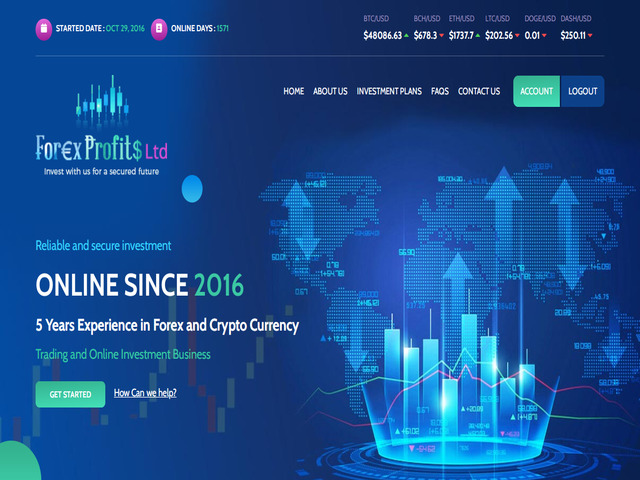 Again fate brought us together and again for the same reason as before! We have several VIP projects, so it's time to consider them. And we will devote this review to the Forex Profits project. And not because its name also contains the word profit, but because it came first! Moreover, there is insurance for it! So for sure - he should be the first!

Actually, Forex Profits started working on February 16th. Rather, according to the administrator, everything began much earlier, and in 2016, but until now the project has not been noticed anywhere, so calling it work will not turn the language. Well, from the 16th, active promotion began, which can be considered a real start.

According to the legend, we think that there is no need to say anything, since everything has already said the name of the project. The Forex market in the legends of admins lived, lives and, apparently, will live for a long time!

Well, the site also shows familiar features. We think everyone already knows who the admin is, so you shouldn't expect anything fundamentally new from him in this sense. Yes, they changed something, repainted, cleaned up, but, in general, the picture has not changed.

With tariffs, too, they did not bring anything particularly new.

We have a lot of them, but what's the point if you can invest, in fact, in two or three tariffs. Although after the first plan, the investment amounts start from a thousand dollars. So, as always, most users above the first will not be able to play. But, in general, for you to navigate, here you can receive either from 0.5% to 20% profit per day for a period of up to one year, or from 150% to 2000% payments in a period of one to 125 days. And yes, only working days are counted everywhere.

What makes Forex Profits happy is the abundance of payment systems, there is almost everything that is used in the HYIP industry. Of course, we will not double-check this. We think that the needs of investors in payment systems are satisfied 100 plus percent. Well, the payments are manual, this was to be expected.

We can still talk, but is it worth it?

You yourself, you are sure, have already understood how to work here, taking into account the past projects of the administrator, and made conclusions about the amount of the contribution that should be allocated for Forex Profits. We just have to add a couple of points!

Remember that we have insurance for this project, and each of you can use it!

Well, as always - we have the best refback! We pay up to 29% of the deposit. So, with us you will earn more than anyone else!

Exclusive Profit - YOUR territory of profit!